Glenfield tunnel and the school logo

Glenfield tunnel was built as part of the Leicester & Swannington Railway which was begun in 1830 and opened on 17th July 1832.

The L&S ran from the pits in North West Leicestershire to West Bridge Station in Leicester. 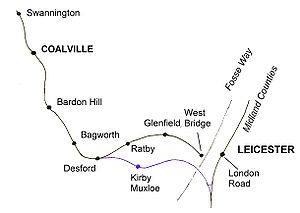 Route of the Leicester & Swannington railway

Due to the sandstone ridge at Glenfield, a tunnel 1793 yards long had to be built.The construction was carried out by gangs of men working from both ends and through 4 large and 7 small  vertical shafts about 150 yards apart.

The tops of the shafts were built out of blue engineering bricks and capped with iron grills to stop people falling in.

The route of the L&S railway was planned by John Ellis and built by Robert Stephenson, George Stephenson’s son at a cost of around £80,000.

The first engine to run on the line was Comet. Further engines were purchased at around £900 each – Phoenix, Samson, Goliath, Hercules, Atlas, Vulcan, Ajax and Hector.

An accident at Thornton crossing, where the railway track crossed a road, led to the fitting of loud steam powered whistles on the engines.

Each engine could pull a train of 24 wagons each carrying 32 hundred weight of coal – a total of about 40 tons. Before the railway was built coal came by horse and cart in loads of about two tons. Cheaper transport brought the price of coal down, making Leicester’s industry more profitable.

Passenger coaches had to have safety bars fitted to the windows to stop people from poking their heads out. The coaches ran really close to the tunnel walls and serious injury was likely.

Safety spaces were cut into the side of the tunnel to allow workmen to shelter as trains passed by.

Inside and outside the disused tunnel. 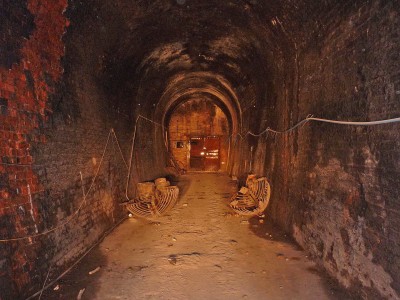 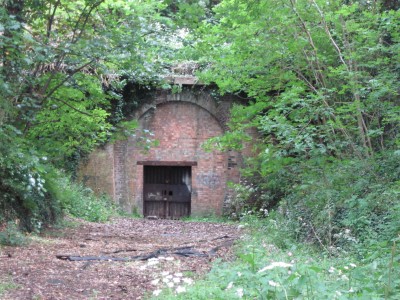 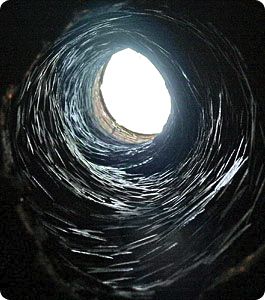 Passenger trains stopped in 1928 and the goods line finally closed in 1966.

In the 1970’s the tunnel was used by the electronics firm, Marconi, to test military lasers.

Later the disused Glenfield tunnel was bought by Leicester City Council for £5.

In 2007/8  the tunnel had to be strengthened to prevent collapse and damage to the roads and houses above. 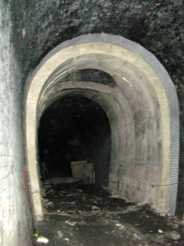 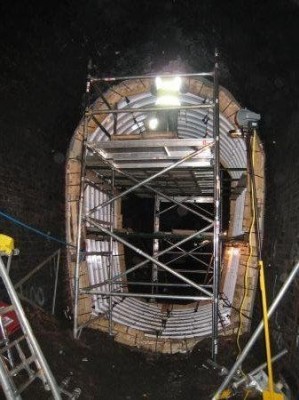 The eastern portal of the tunnel has since been buried, but this is what it looked like around 1910.

The tunnel had a gate to stop animals and people from wandering in.

Below, the first photograph shows Glenfield Station in the early 1960’s. the tunnel entrance is in the distance.

The second picture shows a locomotive emerging from the tunnel, watched by a small group of children. 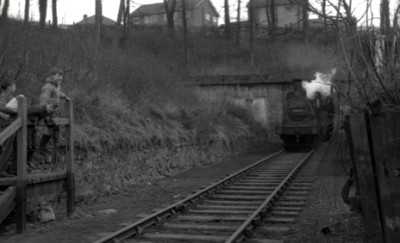 The majority of these photographs are copyright and reproduced by kind permission of John Briggs, Keith Drury and Bill Pemberton – members of the Leicester Industrial History Society. (see www.lihs.org.uk )

The photograph of the house at the eastern portal is copyright and was owned by Norman Jordan who died in recent years. We have not managed to contact his relatives but are happy to remove the photograph should there be any objections.

Other photographs were found on the web but, once again, we were unable to contact the owners to ask permission to use them. We are happy to remove the photographs should there be any objections.